I have just completed my second round of palliative chemo. People keep asking me if I’m happy about that, as most patients celebrate completion of chemo as the first step to wellness, especially when they finish with no evidence of disease (NED). At my former hospital, a bell (thanks to The Bell Fund, which also provides comfort kits to chemo patients) is rung in celebration of the end of each patient’s final cycle.

Things are different for me. This chemo has kept me stable since the beginning of this year, but there is no telling how my tumours, which are still there in my belly, will respond without chemo to keep them at bay. They may go straight back to rampant growth, and I could be seriously ill again in no time, as I was in December. Or if I’m really lucky again, my disease won’t progress for a few months, like after my first chemo regimen, and I’ll have a nice spring and bit of summer. At this point, I have no idea which it will be, or if there are other possibilities. So it is hard to be excited about this chemo being over.

It is also impossible to plan. All I can do is remind myself that I have today and make the most of that gift!

Me and my snuggly cat Piggy, almost ready for the day.

Now that I’m on the topic of chemo, I have a few other things I’ve been meaning to share. I sometimes hear of people, when newly diagnosed with cancer, refusing to try chemotherapy in fear of the side effects. I used to be pretty negative about chemo myself, especially for palliative patients. Some cancers simply don’t respond well to any of the chemicals currently in use, and there is little point in pursuing such treatments, especially when they are so toxic. I’ve read of so many patients who, desperate not to die yet diagnosed with terminal, untreatable cancer, would try anything to prolong their lives. They often end up making themselves sicker and weaker with ineffective or trial chemo than they would have been from their cancer symptoms alone—and even thus hasten their deaths. Such cases are discussed in books by physicians like Atul Gawande’s Being Mortal and Sherwin B. Nuland’s How We Die (both excellent books). When I was first diagnosed, my initial position was to not do chemo, since the chances of just partial success were so low, but I changed my mind and am glad I did both times. I would almost certainly be dead already without it. Instead, I have enjoyed considerable wellness, even in the thick of the chemo treatments.

There is an important difference between curative chemo and palliative chemo. Curative chemo is the kind that can actually make cancer go away completely and even permanently, which is a miraculous thing. Sometimes it works very effectively and even immediately. Sometimes it’s a little more hit or miss. This all depends on the kind of cancer and the specific chemo regimen it is matched with.

Palliative chemo, while it may follow the same protocol as curative chemo, is simply meant to extend the life of the terminal cancer patient by slowing or halting the growth or spread of the disease for a time. At its best, it also relieves some cancer symptoms, as it has for me. Some terminal cancers are not treatable even by palliative chemo, though sometimes people try anyway.

There are many different chemicals used for chemotherapy, and as one patient next to me in the treatment room noted, they have some very fancy names:

to name just a few. (I’m on the first two.) They each also have their own potential side effects. Not all of them, for instance, produce baldness, that hallmark of chemo. Nor do they all lead to vomiting or mouth sores. Most of us imagine people desperately hunched over toilets, puking their guts out after chemo. It isn’t always like that anymore. In fact, chemotherapy’s reputation for producing debilitating illness is no longer accurate since advances in research have fine-tuned treatment protocols to minimum effective doses. Many people are able to continue to go to work throughout their treatment or to continue their regular routines with only minor modifications. I have witnessed some women showing up to the chemo chair as if to an appointment at the beauty salon before a fancy lunch date—they look fabulous!

Physically, I have handled these months of chemo very well. With two treatments in a three-week cycle, I usually have a few days of fatigue when I take some long naps, and maybe a day or two of slight nausea that is treatable with very effective anti-nausea medication. Then after a few days I usually feel as well and energetic as normal (thanks to other medications for pain that I take every day). As far as effects that impact my everyday life and wellness, that’s about it. I’ve often noted that my days post-chemo are no worse than a mild hangover from a couple of glasses of wine.

Some chemo side effects: 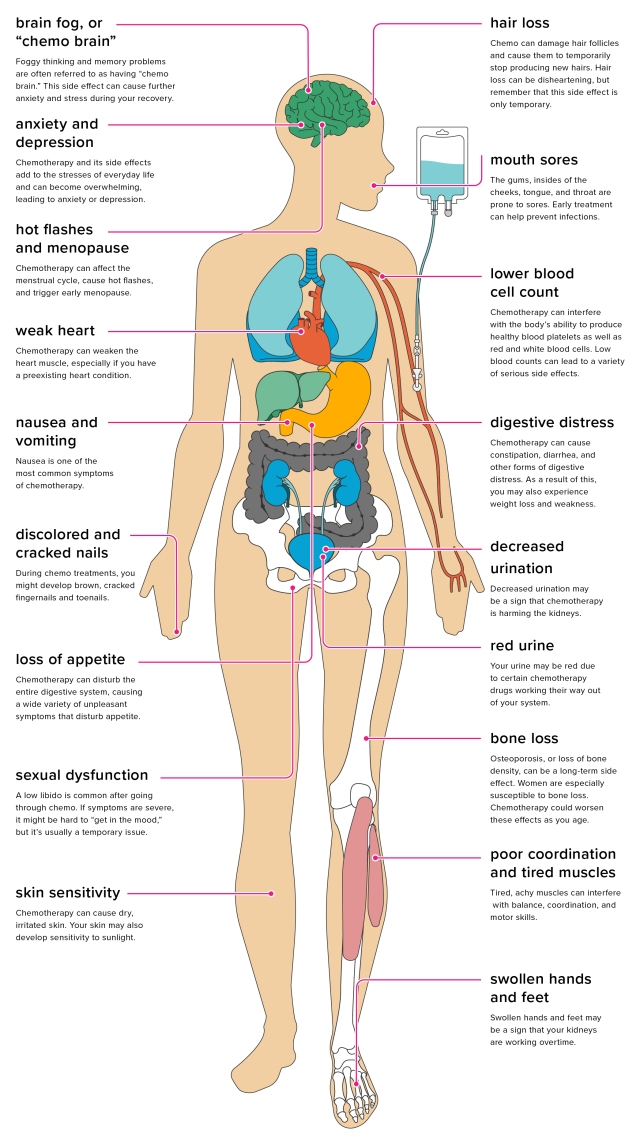 Of course I’ve also experienced a range of the more visible side effects, including hair loss. And my fingernails did become discoloured and partially fall off (painlessly) last summer. This is something the medical professionals don’t like to mention—in fact in the literature I was given they only called it “nail changes”! The one that is bothering me the most now is the weight gain with “moon-face” from steroids (not chemo), which I don’t like because I don’t look like myself. And lately there’s also been a weird thing with my eyeballs, but never mind that.

All in all, I have felt much better on chemo than before it (when I was terribly weak with anemia caused by internal bleeding), so it’s been definitely worthwhile for me to pursue this treatment. If you happen to get cancer (and sadly, chances are about 1 in 3 that you will) there is no reason to say no to chemotherapy for fear of the side effects. They really aren’t necessarily that bad, and the therapy can be discontinued if they are (allergic reactions are one of the more serious problems). But if you’re taking palliative chemo that doesn’t work and is therefore making you sick for nothing, it would be wise to rethink that and come to terms with death.

English teacher, writer
View all posts by susanbriscoe →
This entry was posted in Uncategorized. Bookmark the permalink.

12 Responses to On Chemo