On Changing the World (1)

A year ago, I attended the Women’s March here in Montreal in a rousing moment of sisterhood with women in so many other cities of the world. I wasn’t feeling very well that day, as my still undiagnosed disease was rapidly progressing. But I donned the pink pussyhat I had knit up, then took some painkillers and a lift downtown. Happily, I ran into many friends while there. Last weekend was another march. Because I had chemo two days before I wasn’t sure I’d be up to it, but those painkillers and another lift got me there again. 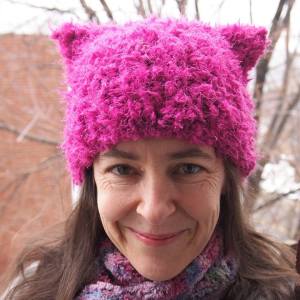 As I’ve mentioned before, social justice issues have been a consuming passion of mine and a large part of my work in life. But when I got sick last year, I handed over all my work in anti-colonial issues to my amazing colleagues. For the next several months I just couldn’t stomach any news or discussion of the harm people were doing to each other in the world – and it seemed there was so much! I was especially traumatised by the US election. Any news story about things like racism or sexism triggered a mild PTSD; I literally felt ill and had to leave the room.

I recognise that being able to choose not to listen to some of these stories is yet another privilege that would not be available to me if I weren’t white. Those who are struggling more directly with racism don’t necessarily get to opt out of that because they’re sick—though there certainly are gender issues in illness! (In small things like the male nurse who took the opportunity to lift my surgical gown for a peek while I was incapacitated and voiceless in post-op recovery, and larger issues like under-funding for women’s health.) Nevertheless, my terminal diagnosis was pressing, and I turned my focus on dying and started writing about it for my blog.

The immediate and overwhelming feedback to my writing showed me that here was another area in need of profound social change. The more I read and thought and wrote, the more I saw how central our society’s fear of death is to so many other problems we create for ourselves both personally and politically. So that became the new focus of my social-change work: talking openly about dying to counteract our cultural denial of death. Fully and deeply acknowledging our mortality, I have come to see, leads to a much richer and more meaningful life. It assuages the fears that lead us down the wrong paths. It reveals the emptiness of the pursuit of status and the material, and the fullness of kindness and connection. I believe now that mortality is a gift. And it’s a gift we can share.

When I first graduated from university in the early 90s, I went to work in shelters for victims of domestic violence. I also received rape crisis counseling training and worked in a shelter for women who were not only victims of domestic violence, but all sorts of related historical violence, including child abuse, sexual abuse, rape, forced prostitution, homelessness, racism, substance abuse, and colonial violence. It was clear to me at the time that all of these forms of abuse and disempowerment were deeply intertwined. Today we use the term intersectional feminism to help us talk about this, and it’s crucial to see how these various forms of oppression are related. What so deeply discouraged me last year with the US election and other events was seeing how little progress we have made. The police were still killing Black people with impunity. Women still weren’t being believed when they reported sexual violence. Refugees were still being refused safe havens. Wars were being waged. Indigenous children were still being taken from their homes. The number of homeless people grew while the rich got even richer.

Despite my aversion to the news, since the #metoo movement began a few months ago I have been following it quite closely. At first I thought my need to protect myself from the trauma of news had abated. But then I realised that the reason I could follow this story was that there was something positive in it. It looked like something was finally changing. Slowly, of course, and with much resistance from the other side and an ever-growing backlash, but still: the public conversation is changing. It’s delving into new territories. It’s examining harder, more complicated, and more nuanced questions that are reaching more and more of us personally. I have read many amazingly thoughtful commentaries (see my facebook page for lots of links to these) and am so encouraged to see that women’s stories are finally being told, listened to, believed, and that these are leading to further sharing, further thinking, further examination of the social structures, practices, and beliefs that underpin them. Ultimately, it is only by deeply understanding and challenging the patriarchal and economic structures of our society and their effects on our most personal as well as public behaviour that anything will change. And I see that happening now. So I am hopeful. I am hopeful in a way I couldn’t be a year ago. Let’s see how far we can take this.

English teacher, writer
View all posts by susanbriscoe →
This entry was posted in On Dying and Living, Uncategorized and tagged death, politics, racism, sexism, social change. Bookmark the permalink.

9 Responses to On Changing the World (1)